It Happened in Tuscany

If you could only choose one, which would it be — honor or duty?

In 1945, Will Mills and his fellow soldiers in the 10th Mountain Division scaled Italy’s treacherous mountains in the frigid night to break through the nearly impenetrable German line of defense. Severely wounded, Will was rescued by Italian partisans, and one, a beautiful girl, tended his injuries until he had the strength to rejoin the U.S. troops.

Will’s decisions and actions during wartime molded him into a bitter, angry man. Seventy-five years later, Will convinces his thirty-two-year-old-neighbor, Sophie Sparke, whose life is a mess, to travel with him to Italy to deal with his darkest secrets and find the Italian woman who saved his life. 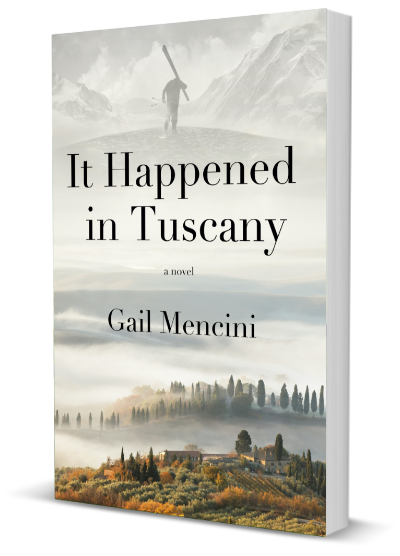 Early Reviews of It Happened in Tuscany

"The author writes tension and drama beautifully, delivering unexpected twists and revelations, not only about Francesca but also about what Will and Sophie hide in their hearts."

"Reading the novel, It Happened in Tuscany, I laughed, I cried, and I reveled at being in Italy. Gail Mencini is a master at weaving all things Italy into her novels."

"The descriptions are compelling, the images are vivid and the characters are believable. This is an incredibly rich story that took me on an emotional yet beautiful journey.”

"The gripping, opening World War II sequences, where we first encounter Will and his comrades, are visually descriptive and emotionally draining."

"It Happened In Tuscany is a touching story that captures the power of love, the bond of family, the essence of friendship, and the ability to heal from life's experiences. It is a heartwarming story that will resonate long after the last page has been read."