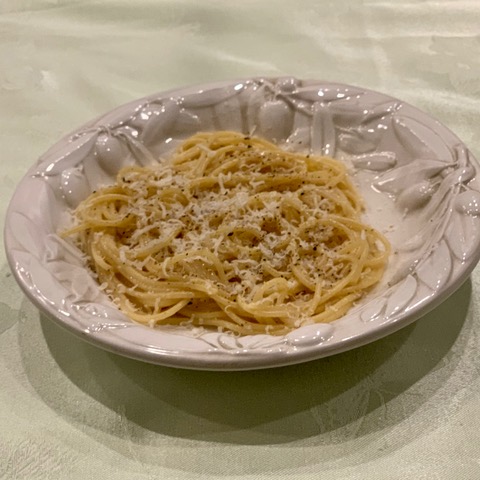 The name of this simple pasta translates as “Cheese and Pepper,” the primary ingredients in the sauce. This pasta is a favorite of Margherita’s mother. While in Italy, Margherita claimed it was simple enough for me to prepare, and she was right!

1 teaspoon freshly cracked black pepper, plus more to serve at the table

1 cup freshly grated Pecorino Romano cheese, plus more to serve at the table

While the water comes to a boil, grate the cheese using the curvy edge of a box grater and set aside. Coarsely grind the black pepper.

Add the spaghetti to the salted, boiling water and cook for two minutes less than the package directions.

Meanwhile, using a nonstick sauté pan large enough to eventually hold the cooked pasta, toast the black pepper on medium heat for two to three minutes until you can start to smell the pepper. Turn the heat to the lowest setting, and add two tablespoons of butter, swirling the pan to coat the bottom. Remove the pan from the heat as soon as the butter has melted.

Reserve one cup of pasta water before removing the noodles. Return the butter-pepper pan to medium-low heat, add the cup of water, and bring to a simmer. Add the remaining two tablespoons of butter and the cooked spaghetti to the sauté pan. Stir the spaghetti and cook until the noodles are coated with the liquid, about a minute.

Remove the pan of spaghetti from the heat and add the Pecorino cheese. Toss the noodles with tongs until the cheese has melted and the pasta is al dente. Add salt, if needed, to taste.